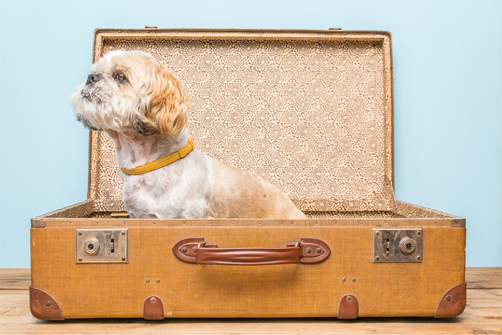 The Shih Tzu heads west! During the 19th century and early 20th century, Shih Tzus were sent to other countries as gifts. This is because the communist regime that took power outlawed the breeding of the dogs.

In fact, every Shih Tzu in the United States today can trace its lineage back to the few Shih Tzus rescued from China. Later on, these little regal dogs totally charmed the Western world.

As the Shih Tzu heads west, it came as no surprise to any that by the mid-20th century, they were here to stay.

The Shih Tzu Heads West To The United States

Two female Shih Tzus by the name of Ding-Ling of the Mynd and Wuffles of the Mynd were the first to be imported into the United States from England in 1938.

Many more followed. However, during that time, they were not distinguished from the Lhasa Apso by the AKC.

The AKC probably concluded that all dogs with long hair from the Tibetan region were the same. And considered them Lhasa Apso. For example, the name of the Shih Tzu was not set until well into the 20th century.

Before they were recognized, Shih Tzus were called Lhasa Lion Dogs, Lhasa Terriers, and Tibetan Poodles.

The AKC finally accepted the Shih Tzu as a diverse breed in the Miscellaneous Class. This is the step before final recognition as a part of the AKC’s seven groups of dogs.

Nevertheless, this did not come without hard work and determination. In 1955, a group of breeders spent a lot of energy and resources trying to convince the AKC that the Shih Tzu was worth it. The dogs by this time had a large following and was different from the Lhasa Apso.

The Shih Tzu was well on its way to becoming official. However, being in the Miscellaneous Class did not provide them the opportunity to compete in dog shows.

Therefore, this was no time for celebration, because the Shih Tzu still had a huge hurdle to overcome, which was full recognition from the AKC.

The Creation Of The American Shih Tzu Club

In 1963, the American Shih Tzu Club (ASTC) was formed to promote the breed more effectively and actively. Members in the club wanted one thing, and one thing only, and that was to show off their little exotic Lion dogs in the dog show ring!

To get full recognition from the AKC, they followed all the rules, lobbied them relentlessly, and strode through all of the red tape necessary. However, there was one big problem.

In 1952, someone crossed a Pekingese with the Shih Tzu; therefore, the AKC required the breed to be at least three generations pure. This meant there had to be pure breeding to be accepted fully as a full member of the AKC’s Toy Group.

The AKC finally accepted the Shih Tzu into the Toy Group in 1969. This inclusion was a result of the Shih Tzu’s popularity gaining so much steam so fast. It could not be stopped.

On the first day of the AKC’s recognition of the breed. A little Shih Tzu by the name of Canadian Champion Chumulari Ying-Ying took home the prize for Best in Show at the New Brunswick Kennel Club.

However, the little Lion dog did not stop there; in fact, it picked up the Best Toy and Best in Show wins right and left.

The Shih Tzu has remained the mainstay and favorite dog at shows ever since. Welcome to America, little Lion dog! I hope you enjoyed this history lesson about the Shih Tzu heads west.