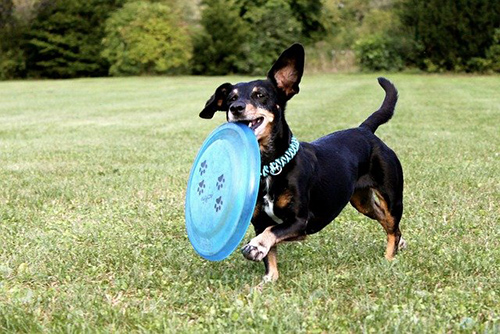 The Dachshund comes in six varieties in the United Kingdom, which fall into two sizes, standard and miniature. This breed also comes in three different coat types, such as smooth-haired, long-haired, and wire-haired. Even though there are minor differences between them, they should conform to the same Kennel Club Standard. However, Britain did not recognize the wire-haired Dachshund until 1959.

The Dachshund’s name means Badger Dog in German, which was probably the main reason they developed them. However, they will also go to the ground after other animals. They also performed duties above the ground, such as tracking down the wounded game and flushing them out of thick cover. This breed was hugely popular in the UK since the 19th century. In fact, Queen Victoria owned several. Unfortunately, interest in the breed waned during both world wars because of hostile feelings toward the Germans. However, they regained popularity and much more so in the 1950s.

Although the Dachshund is low in stature, they have a muscular body; do not pander to their love of food; otherwise, you will have an overweight Badger Dog on your hands. Their defiant carriage of the head, and intelligent expression, shows their courage, sometimes to the point of impetuousness. This is an independent breed, so that training can be challenging; therefore, it is crucial to be firm, and through the patience of the owner, obedience is achievable. All colors are acceptable except for white; the only white on a pure Dachshund should be a small patch on the chest. Although the white patch is permissible, they do not consider it desirable.

Temperament: These dogs are brilliant; however, they can be extremely aware of their surroundings, making them easily distracted. They’re revered for their independent nature and their problem-solving skills.

Grooming: The Dachshund requires a weekly brushing for their smooths and longhairs. The wirehaired coats require being hand stripped, which will maintain the hard, protective consistency.

Activity level: Modest. Mostly, walk this dog twice daily. However, this may change depending on the dog. It would be best if you exercised Dachshunds, or they will become bored and overweight. Abstain from allowing them to perform strenuous activities, especially when they’re young.

Color: dachshunds can come in solid colors varying from cream to deep red; bi-color in black, chocolate, wild boar, which is synonymous with the Wirehairs, and fawn with tan or cream markings, dapple or merle; brindle; and sable.

Group: they recognize The Dachshund as a member of the AKC and UK Hound Group

Coat: The Dachshund’s coat comes in 3 assortments. First, the smooth coat is short, flat, and glossy; Second, the wirehaired coat is short, hard, and wiry on the outside, with a much softer undercoat and sometimes longer coat on the beard and eyebrows; Third, the long-haired coat is a combination of glossy and slightly wavy, with a longer coat on the neck, chest, ears, tail, and stomach.

Make it a point of duty to always buy from a reputable and trustworthy breeder or consider getting a rescue dog.