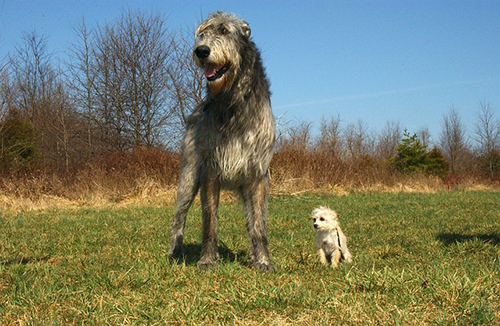 The Irish Wolfhound and other gigantic wolfhounds have been prized since ancient times. For centuries, ownership was restricted to the aristocracy. Wolfhounds were sent to royal kennels in India, Russia, Persia, and Eastern Europe. But by the 19th century, the dogs were considered extinct. Major H.D. Richardson was responsible for rekindling interest in the breed in Britain. Captain George Graham is cited as the breeder responsible for reconstructing the breed, developing sustained interest, and allowing recognition.

The Irish Wolfhound resembles a rough-coated Greyhound with a more robust build. Large size is mainly valued in the breed. The power, speed, and size combination allows the wolfhound to chase down and overpower large prey. Despite its size, this breed should be built gracefully, its gait easy and active.

This breed is built for power and speed. It is the tallest sighthound, athletic and powerful, with a commanding presence, covered by a rough, shaggy coat. It has a long, sturdy back with an arched loin, a very deep, broad chest, strong, long straight legs, and a long tail carried with an upward sweep. The long head is held high, the muzzle is slightly tapered, and the small ears are folded back.

Activity level: Moderate. Irish Wolfhounds possess plenty of endurance and need a fenced yard to run. Puppies should avoid strenuous exercise before one year of age. The dogs love long walks and an opportunity to stretch their legs. When inside the home, the dogs need room to stretch out on a soft surface and should not be forced to live in cramped areas. It can develop callouses if allowed to lie on hard surfaces too often.

This dog is traditionally described as “gentle when stroked, fierce when provoked.” Matured wolfhounds are noted for their calm, affectionate, gentle nature. The dogs are straightforward to housetrain and accepting of most other dogs. Some wolfhounds get along well with cats, but not all. They have the typical prey drive of sighthounds and may chase small animals.

The Irish Wolfhound is the gentle giant, an appropriate description of this easygoing and soft-natured breed. The dog is calm, patient, kind, sweet, and sensitive inside the home. Despite its significant size, it is fantastic with children, other dogs, and pets. It is friendly with strangers and brave when the need arises.

Irish Wolfhounds demand an enormous amount of space, food, and companionship. This breed is expensive to maintain. Contact the parent club to learn about the breed and locate reputable and responsible breeders for Irish Wolfhound puppies for sale. The puppy price will depend on the breeder and the dog’s pedigree.