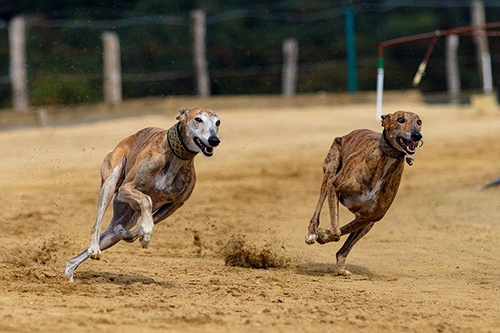 Canine historians believe the Greyhound to be a sighthound, which is amongst the first dogs bred by humans. Sighthounds are dogs that can catch game by overtaking it.

The ancient Egyptians, Romans, and Greeks have Greyhound-like dogs depicted throughout their culture. In Britain during the Saxon period, these dogs were already prevalent. Therefore, both commoners and the upper class valued them for their ability to put food on the table and for sport and chase.

Were Once The Dogs of The Elite

The Forest laws enacted by Britain around 1014 banned all but the upper class from having Greyhounds near royal forests unless “crippled”; these laws stayed on the books for about four hundred years. Even when the rules no longer existed, they continued to be the elite’s dogs because, with the increased importance of farming and native animal food sources, a running dog was not beneficial to have around.

Instead, owners used the dogs for chasing hare for sport, and during the 1800s, this form of chasing, also known as coursing, became a consuming pastime for the elite. Early visitors to the new world often brought the dogs with them, while here, they proved proficient at coursing on the open plains. When they made coursing permissible to the multitudes by staging it first in closed parks and then on tracks after a motorized decoy, the Greyhound’s life changed forever.

Greyhound track racing, which began in 1926, proved to be so popular that they bred dogs for short bursts of speed, resulting in the fastest breed of dog.

These dogs continue to contend at dog shows, which they had done since the 1870s. However, the AKC recognized them in 1885. The breed soon became separated into the show and racing types, which were rarely interbred.

In the United States, these dogs are among the less popular breeds according to show dogs’ AKC listings. The National Greyhound Association (NGA) registers thousands of dogs every year, and thankfully, retired racers from NGA listings are becoming well sought after as pets.

This breed is, without a doubt, the ultimate running dog. It was created for speed; thanks to its arched back and long legs, the Greyhound can stretch and contract maximally while performing the double-suspension gallop. The breed’s excellent muscle mass and light legs give it the ability of enhanced speed.

The dog’s feet are long and narrow, which gives it ultimate leverage. Also, when running at high speeds, the tail acts as a brake and a rudder. Its coat is short and smooth.

This dog is “the world’s fastest couch potato,” Therefore, they’re very calm, well-mannered, and quiet in the home. They’re excellent with other dogs and pets if raised with them. Though, they will chase any small animal that moves when outdoors. They’re also silent with people they do not know and can be timid and sometimes sensitive around strangers. The breed possesses an independent nature, and they’re eager to please.

This dog requires exercise daily. It is a sprinter and not an endurance runner. In fact, they can reach their daily exercise requirements with an opportunity to run in a safe closed-off location, or by extra long walks on a leash.

Running and chasing outdoors is what this dog loves to do. If not exercised in a safe area, they can run into danger at extreme speed. Also, they love the comfort of companionship and must have a warm, soft bed. Their coat is not high maintenance like some breeds; its care is pretty straightforward. It only requires occasional brushing to remove dead hair.

One major health concern in this breed is osteosarcoma. However, owners should also look out for esophageal, gastric torsion, SAS, DCM, and osteogenesis imperfecta. They’re otherwise a very healthy breed and can live up to 10–13 years.

Also, keep in mind that racing injuries are common in retired racing dogs such as hock, muscle, and toe injuries. Both types of Greyhounds are also sensitive to barbiturate anesthesia, and they’re prone to cuts and tail-tip injuries.

Thinking About Adopting a Greyhound? 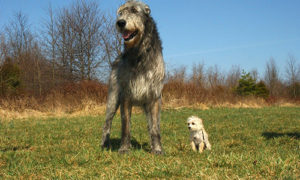