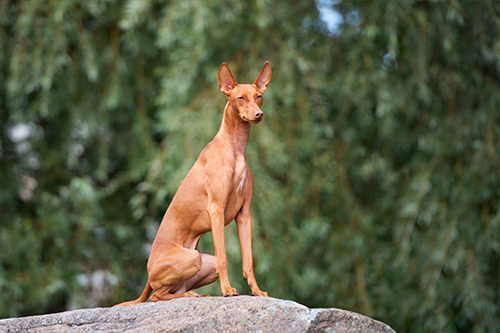 The Cirneco dell’Etna is the only native breed of Sicilian dogs and has been present on the Italian island for over 2,500 years and is known for its ability to hunt small animals and its adaptability to extremes in weather and terrain. In the early 20th century, the breed numbers and quality had seriously declined. In 1932, Dr. Maurizio Migneco, an Italian veterinarian, published an article that called attention to this ancient national breed; in response, a group of Italian dog enthusiasts put into practice breeding programs to revive the breed.

In 1939, the first breed standard was written, resulting in the breed being recognized by the Italian Kennel Club as the Cirneco dell’Etna, the “dell’Etna” added in respect of the area around the volcanic Mount Etna that was considered the “cradle of the breed.” The FCI accepted the dog in 1947, and it was established in the 1990s in America, where it entered the AKC’s Foundation Stock Service in 2006 and the Miscellaneous Class in 2012. The Cirneco looks like a small Pharaoh Hound, and both breeds are related.

The Cirneco dell’Etna is a sleek, elegant, slender, strong sighthound with long limbs and flat muscling. The silhouette is square, with a slightly sloping topline. Its chest reaches almost to the elbows. The dog’s low-set tail is long enough to reach the hock and is carried in a high curve when it is moving.

The head is elegant and oval-shaped, with a tapered muzzle and a refined jawline. The neck is graceful and arched. Oval, small eyes range from ochre to amber to gray and should not be dark. The color of the nose resembles the coat color. The mobile, expressive ears are erect, triangular, and set high and close together. The overall expression is alert and spirited, with soft eyes.

Activity level: The Cirneco is a powerhouse possessing fantastic stamina for a dog of its size. The breed is typically quiet when in the house, but it needs to run daily in secure areas and long on-leash walks; they may never be completely reliable off-lead with their strong hunting instincts. This dog is highly family-oriented and should reside indoors with its owner. Daily, they require a moderate stroll around the neighborhood or a vigorous backyard game. Although they are not natural swimmers or retrievers, they can be trained to do both.

Grooming: The dog needs weekly brushing with a hound glove to keep the coat clean; occasionally, bathing is necessary. These dogs are clean and enjoy all types of comforts; they want warmth and dislike the cold.

Coat: Smooth, short, and close-lying, fine to slightly coarse in texture. It may be longer on the body than on the head, ears, and legs.

Color: Shades of tan and chestnut, lighter and darker hairs are intermixed and mixed with white. A white-collar, self-controlled white, or white with orange patches can also be seen, but these colors and markings are less desirable for showing.

The Cirneco dell’Etna lacks the aloofness of many sighthounds, although the breed is watchful and naturally reserved toward strangers. These dogs are gentle, devoted, lively, affectionate, and playful with their owners. Its sensitivity and strong predatory instinct will inevitably affect how they respond to training, so it is essential to have a patient, persistent, gentle yet firm approach.

Sighthounds and primitive breeds are famous for their independence, but the Cirneco dell’Etna is far less independent than most. The dogs get along exceptionally well with kids, other dogs, and pets. It enjoys hunting and can sometimes stray away by rabbit trails or absconding wildlife. It tends to be constantly busy and seems always to be involved in some project. The dog is rarely deterred by obstacles in the way of what It wants, keeping to its hunting heritage. It is a poor protection dog but an average watchdog.

Cirneco dell’Etna’s are natural hunters who will run off after squirrels, cats, or whatever else attracts their interest, so they must be exercised on a lead or in securely fenced-in areas. Cirneco owners need to use gentle but firm training to let these naturally dominant dogs know who is in charge. Visit the parent club’s website for information on Cirneco dell’Etna puppies for sale. The parent club website will also have information and resources pertaining to Cirneco dell’Etna breeders in the USA. Once you find a reputable breeder, the dell’Etna price will depend on that breeder and the dog’s pedigree.

Rescue: Information on the parent club’s rescue committee is available on the website