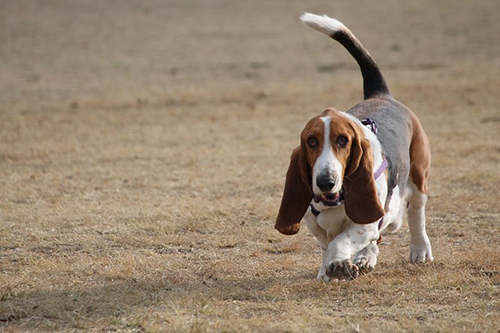 The Basset Hound was first mentioned in texts found in the 16th century about badger hunting. Since ancient times, short-legged dwarfed specimens occurred in various breeds, but it is hard to know when these dogs were purposefully bred and which ones eventually led to the Basset Hound. However, there is evidence that dwarfed hounds coexisted with full-sized hounds as long ago as the 5th century A.D. in France.

Basset is derived from the French (bas), which means dwarf or low thing, so conclusive proof of the breed may be challenging to follow. The pre-Revolutionary French used short-legged dogs for hunting at a slower pace, though most of the dogs were disseminated, and their fates undocumented, during the French Revolution.

After the Revolution, history became more apparent when more commoners took up hunting, often bolstered by guns. A dog that can follow on foot but still had excellent scenting capability and strong heavy bone – in principle, a short-legged version of the pack hounds familiar with the upper classes was needed. Because the Basset Hound was unable to chase the quarry with speed, the quarry was less prone to be on the run and thus given an easier target for the hunter.

What do Basset Hounds hunt? The dogs do not hunt all mammals but are mainly suited for hares and rabbits. There were four versions of short-legged hounds created, with the Basset Artesien Normand most closely resembling today’s Basset. Crosses with Bloodhounds were made to increase its size, and the results were then tempered with subsequent crosses to the Artesien Normand in the late 1800s and then again in 1930.

In the late 1800s, the first Basset Hounds were brought to American and England owners, where interest in the breed gradually grew. The Basset became one of the first breeds to be recognized by the AKC in 1885. The dog’s witty expression won it a place in advertising and entertainment and many new pet owners’ hearts in the mid-1900s.

This dog is low, long, and dignified. It is a sturdy, muscular dog with a long, straight, and level back. The dog’s chest is complete, the sternum extends in front of the forelegs and is noticeable in silhouette. The Basset’s short, heavy-boned legs are powerful, and the paws are massive. Its long tail is carried high. A long muzzle, a large nose, distinctive loose wrinkles, and long, glossy ears characterized the dog’s massive head.

Activity level: Moderate. Basset Hounds possess the stamina for a day in the field and live contentedly as house pets as long as they have two or three outings daily. Bassets will pursue prey and should be exercised on a leash or within a fenced-in area. The dog’s exercise can be satisfied with walking on leash or playing in the yard.

Grooming: The coat will require weekly brushing to keep it in good condition and bathe as needed. The heavy, long ears will require weekly cleaning because they are prone to infection, as air cannot circulate well. Basset owners need to pay attention to the droopy areas around the eyes and regularly trim the nails. The face will need to be routinely cleaned to combat odor around the mouth and wrinkles because the dogs tend to drool.

Color: Any recognized hound color is allowed in competition; standard colors in the Basset are white, red, and the classic tricolor (white, tan, and black) and tan and white.

These dogs are famed for their easygoing, good-natured demeanor. As a pack hound, it readily accepts the companionship of other dogs. Basset Hounds are patient and gentle with children and devoted to their families. However, the dog is a scenthound, hard-wired to search for prey. Keeping a Basset Hound’s attention during training requires patience and creativity. It tends to be slow-moving and stubborn. The dog possesses a loud bay when enthusiastic on the trail.

Basset Hounds are among the most easygoing and good-natured breeds. It is excellent with other pets, dogs, and children, though children need to be warned not to strain the dogs back when playing games. When inside the home, it is calm, but as mentioned before, it needs regular exercise to keep it fit and healthy. Bassets choose to investigate slowly, and it loves to trail and sniff. It is a determined and talented tracker that is not easily put off from its course, leading to the dog following the scent until it becomes lost.

These are dogs prone to obesity and can use some encouragement to get up and to move, be conscious that you will have to walk your dog at least once daily to maintain optimal weight. Because of their long backs and heavy bone, puppies are prone to injury and strain; therefore, owners should caution growing puppies and not allow them to climb or jump the first year.

Find Basset Hounds for sale by visiting the parent club’s website for a list of reputable breeders. The price of puppies will be contingent on the breeder and the dog’s pedigree. You can find the Basset Hound mix or miniature information by typing the search term (miniature Basset Hound puppies for sale near me) into Google or your favorite search engine.

Rescue: Information about Basset rescue can be found on the parent club website