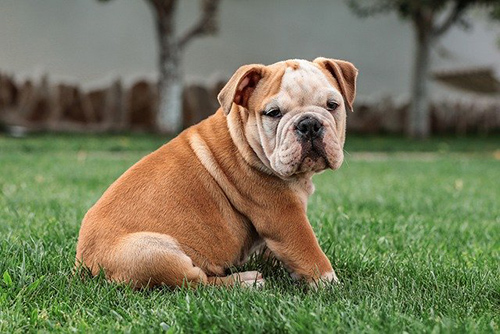 The Bulldog is a magnificent breed; it has been developed from the old bull-baiting dogs. However, its shape and substance have changed immensely over time. In fact, as far back as the 1630s, it was known as a Bulldog; however, after the days of bull-baiting passed, it was still very active in fighting in the dog pits. This Breed first appeared as a viable show dog in 1860 and has not looked back since then. The breed has not only changed in appearance after that time but in personality as well.

This breed conveys an impression of determination, strength, and dignity. It has become one of the most popular dogs in the world. Although the Bulldog sports a fierce appearance, it has a loving and loyal temperament and is alert, bold, and brave. The breed is thick-set and low in stature; also, it is broad and powerful. The head is immense in size, and no feature should be to excess. The coat comes in a variety of colors and is fine-textured and short.

TEMPERAMENT: Despite the Bulldog’s tough appearance, it is a kind, appeasing, resolute, and courageous dog. This breed’s personality varies from reserved to outgoing, but as a law, Bulldogs are laid-back and loving dogs. However, they can be a little stubborn; therefore, early training is recommended. They respond better to short training sessions while using positive reinforcement.

GROOMING: A weekly brushing is recommended for this breed. Their face wrinkles should be cleaned every day. Starting the grooming process at a young age is best. A Bulldog that does not cooperate with grooming can make your life a living hell. Brushing the ears and trimming the nails would go a lot smoother with a calm pet.

ACTIVITY LEVEL: Little. These dogs do not do well in heat; therefore, they should not be walked when hot out. They’re also very poor swimmers and should be supervised around water. A daily walk when it is cool out is fine.

GROUP: The Bulldog is recognized as a member of the AKC Non-Sporting Group and the UK Utility Group

Bulldogs should be kept in an air conditioned environment.