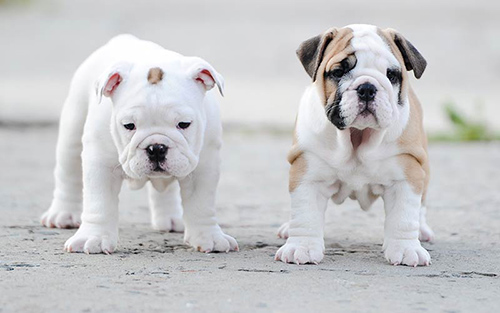 If you have always wanted to own a dog, I can bet that you have considered the French Bulldog or other different types of bulldogs. If the answer is yes, I can attest that the decision is a daunting one. The fact that the Frenchie is so cute with those bat ears and shiny button nose gives you the perfect excuse to bring one home. When you look at them directly in their eyes, it is as if you melt because they are so adorable.

Their slight build is also irresistible, another reason to scoop them up, bring them home, take care of them, and pet them forever because they are so friendly. Going home to a French Bulldog is like going home to a little fellow that is always happy and in a good mood. This Bulldog breed is cute and easy to deal with, and although they have a gloomy face, they are dependable, amiable, and lively.

French Bulldogs first arrived on the scene in the 1800s. They originated from a cross between different types of Bulldogs from England and France’s local ratters. Even back then, Frenchies were cute and adorable, and as we can see, nothing has changed.

This breed makes for a beautiful companion. Thanks to their tolerable and easygoing attitude, their an excellent choice for families with small children. The French Bulldog is also very social; therefore, they are wonderful companions when out and about in public places. The breed is also alert and active. Frenchies make excellent watchdogs because they are highly protective of their families. A French Bulldog would not hesitate to bark at strangers.

A History Lesson on The French Bulldog

The Frenchie’s big button eyes are incredibly irresistible and mesmerizing, which gives them the power to enslave any human with one glance. Their coats are so velvety that it makes you want to pet them immediately. And let us not talk about those adorable bat ears.

The ancestors of the French Bulldog can be traced back to England and Paris. They originated from a line of local Parisian ratters and English Bulldogs. This cross gave them the physical characteristics we love and adore today. They still resemble the Bulldog but have bat ears and are small in stature.

During the mid-1800s, blood sports were banned in England, which ended the local bullbaiting industry. Therefore, the Frenchie’s ancestors, the English Bulldog and Victorian Bulldog, no longer served their sporting purpose, which resulted in them being bred as companions. However, due to their vast size and intimidating features, they were crossed with other breeds to make them appear friendlier. As a result, the toy Bulldog and small bulldog breeds became extremely popular in England.

Not long after, the lace industry found its way to France, and the workers brought their toy Bulldogs with them. As a result, small-sized dogs became extremely popular, and miniature Bulldogs’ importing became big business in France. From then on, the name ‘French’ Bulldog was born.

Early in the breeding process, French Bulldogs would have either rose or bat ears. However, many preferred the rose ears, but the Americans did not. Americans thought the bat ears were a distinct feature that should be kept. Eventually, the rose ears disappeared from the breed.

The formation of the French Bulldog Club of America came about due to the rose or bat ears controversy. This club was the first organization in the world devoted to the Frenchie. The club sponsored a specialty show in New York City, which showcased the breed in 1898 in the Waldorf Astoria ballroom. As a result, the breed enjoyed broader press coverage, which led to the Westminster Kennel Club’s introduction in 1913, and the rest is history.

These dogs are small in stature but solid when it comes to height and weight. Typically, a male Frenchie should weigh about 31 pounds while females weigh about 21 pounds. Both sexes stand about 18 inches in height. Do not let their tiny appearance fool you. The French Bulldog is no fragile dog, thanks to its strong bone structure. Also, thanks to their muscular ligament strength, they rarely suffer from broken or injured bones.

Another distinctive feature of the Frenchie, apart from its size, is the half-flat and half-domed skull and the cute, adorable bat ears. The round eyes, wrinkly face, and short tail make this dog a crowd favorite.

Most Frenchies snore, snort and wheeze loudly because of their small face. However, they hardly bark at all. This breed is highly polite with people and is not much of a burden to train, thanks to their intelligence. French Bulldogs make for excellent watchdogs, although they were primarily bred for companionship and as pets.

Another factor that makes these dogs highly sought after is that they are alert and active but not overly boisterous. The American Kennel Club describes the breed as a “clown in the cloak of a philosopher.”

French Bulldog and English Bulldog: What’s the Difference Between These Different Types of Bulldogs?

There are plenty of different types of bulldogs. However, the most sought after are the American, French, and English bulldogs. The English originated from Asiatic mastiffs and originally made their living in sports such as bullbaiting.

It is no surprise that the English Bulldog comes with a large head, short muzzles, a muscular build, and an undershot jaw. Although they give off a glum demeanor because of their features, these dogs are generally softies, and they are incredibly gentle and patient.

The French and British bulldogs differ in origin and vary in terms of size and temperament.

The English Bulldog has the distinction of being the classic representative of the breed. It is more widely known. According to the American Kennel Club, the name is just ‘bulldog,’ but it also used to be called British Bulldog.

The English Bulldog possesses medium height, and its stance is broad, and it is extraordinarily strong looking. Generally, bulldogs weigh about 50-60 pounds and appear compact. However, the dogs can also weigh as much as 40-70 pounds.

When it comes to appearance, bulldogs also have wrinkled and flat faces. However, because of poor breeding, some have a slight muzzle.

When it comes to temperament, this breed looks intimidating; however, they are very gentle and love attention. The dogs are also highly protective of their families, which makes them superb watchdogs. Apart from that, they are tenacious.

The most significant difference between the French and the English is their disposition. The English Bulldog tends to be more submissive to their owners. They are determined and friendly. On the other hand, French Bulldogs are characterized by their liveliness. They are playful, alert, easygoing, and adapt quickly to their surroundings, making them fantastic apartment dogs.

Frenchies are known to be likable little dogs. They seldom bark and remain calm and patient with their owners. The English are also amiable and patient, which allows them to connect with children. However, they can become overly sensitive, leading to them not wanting to leave the house without their owner.

When it comes to health issues, Frenchies have fewer. Therefore, they live longer than English Bulldogs. Typically, Frenchies live around 9-11 years, while the English can live approximately 8-10 years.

If you do not like drooling, then the English Bulldog is not for you. These dogs are known to have a higher drooling tendency compared to the Frenchie.

French Bulldog and American Bulldog: What’s the Difference Between These Different Types of Bulldogs?

The American Bulldog is just another popular Bulldog breed. It is the largest out of all three; they are also very athletic and agile. Compared to the other two dogs, the American has the longest legs. The American is not only reliable and loyal, but they are also determined and brave. They are dedicated and protective of their owners.

Male American Bulldogs are stockier and heavier boned than females. Also, this Bulldog breed is known for its alpha characteristics. The dog’s square-shaped heads are also larger with powerful jaws while the necks are muscular. Their nose is black, grizzle, red, or brown, although black is the preferred color based on the standard. These Bulldogs come in various colors such as piebald, fawn, tan, brown, red, white, and brindle.

Naturally, both French and American Bulldogs are easy to care for. Both are excellent dogs for owners that do not want to spend a lot of time and finances on their pets. The significant difference between the two other than their origin and size is their temperament and exercise needs.

When it comes to temperament, American Bulldogs are very loving. They are courageous and alert, which makes them excellent watchdogs. Like Frenchies, they will not hesitate to bark if they see a stranger.

Believed to be the most athletic of the three, American Bulldogs need regular exercise. A daily walk in the park is recommended. They are an excellent companion to those owners that like fitness activities.

American Bulldogs are easier to train than Frenchies. Among the different types of bulldogs, the American is an excellent dog for first-time dog owners because they obey and listen almost immediately. However, compared to the Frenchie, they can be stubborn. Therefore, it may be wise to invest in some form of obedience school or training.

When it comes to life expectancy, American Bulldogs tend to live longer than French bulldogs. They can outlive them by 2-3 years, giving them a life expectancy of about 11-14 years. Unfortunately, they are prone to hip dysplasia.

Whilst American Bulldogs have a tendency to be more agile than Frenchies, the advantage of having French bulldogs is that they acclimate better to new environments.

And when it comes to shedding, American Bulldogs have the propensity to shed more than the French Bulldogs, which shed only seasonally.