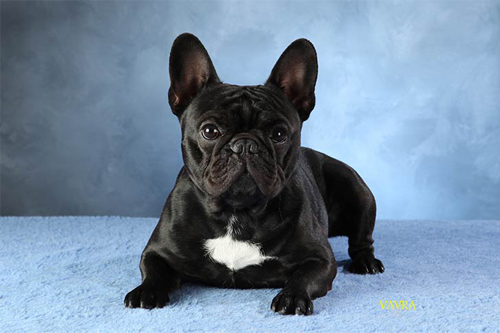 The French Bulldog or the Boule-dog Francais is most likely a descendant of the toy varieties of the English Bulldog. It rose to prominence in the late 19th century and women fell in love with it as a fashionable companion.

The breed wasted no time becoming popular in America, just like it had in France and England. Also known as the Frenchie, it was written off as a Victorian fad in the early part of the 20th century and cast in the Boston Terrier’s shadow.

However, by the end of the century, the French Bulldog grew in popularity, and today, they continue to be the favorite companion for many the world over.

The Frenchie’s eyes are set wide apart and are dark in color, which gives it an intelligent, alert, curious expression. Its front legs are short and straight, set wide apart, and the hind legs, longer than the front, are muscular and strong.

Color: Solid brindle, fawn, white, and brindle and white are the most popular colors

Activity level: Low. French Bulldogs are not very active; however, experts still recommend a daily walk. Begin lead training at an early age. Frenchies can be very willing, but they can be very stubborn, too, turn lessons into games, and this breed will want to play all the time.

Grooming: Brushing once a week will keep the coat resilient; shedding is minimal

Temperament: French Bulldogs are relatively well-behaved, adaptable, and comfortable companions with an affectionate personality and an even disposition; also, Frenchies are generally active, alert, and playful; however, they’re not overly rowdy. Somewhat territorial and protective, Frenchies make reliable watchdogs. First and foremost, they make amazing companions as well as great apartment dogs. Also, they make great cuddly bedmates that love to hog the pillows and will occasionally snore. Socializing your French Bulldog early helps with confidence as well as character.

Buyer’s advice from Parent club: Try to find a reputable breeder, insist on AKC registration papers and a copy of the pedigree, and ask to meet the puppy’s parents on the premises. Avoid “rare” colors, such as chocolate.

Regional clubs: The FBDCA’s website lists established and developing clubs on its “Local & Regional Clubs” page under “About FBDCA”.

Rescue: Rescue information is located on the “List of Resources” page under “Resources”.