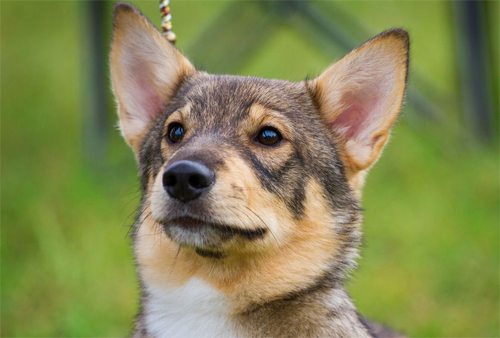 The Swedish Vallhund is an ancient farm breed utilized for more than a thousand years to herd cattle and sheep. Thus, this dog is one of the original breeds of Sweden, which dates back to the Vikings era.

Historians believe that the Vallhund shares roots with the Corgi breeds of Wales and credits the Vallhund as the oldest. For years, the breed was hardly known in Sweden or elsewhere. Then in the early 1940s, Bjorn von Rosen and K.G. Zettersten revived the breed from the few remaining Vallhunds in Sweden.

By the year 1943, the Swedish Kennel Club recognized the Svensk Vallhund; however, twenty years later, the breed received a name change to Vastgotaspets to recognize the breed’s province where its revival occurred.

Marylin Thell of Rhode Island imported the first two Vallhunds into the United States in 1984.

The Swedish Vallhund is a small, powerful spitz breed with a rectangular, balanced proportion and a close-fitting, medium-length, hard coat. It has a long, muscular neck, a level back; an oval-shaped chest; and short, powerful legs.

The tail may be naturally bob, stub, or long, or it may be docked. However, the natural long tail may curl over the back. The head is rather long and wedge-shaped with medium-sized prick ears, a black nose and lips, and medium-sized oval-shaped eyes.

Coat: The Swedish Vallhunds coat is a typical Nordic double coat consisting of a medium-length, harsh topcoat and a soft, dense undercoat. Therefore, the coat is slightly longer on the neck, chest, and back of the hind legs.

Color: Any color from gray to red, marked in a sable pattern

Temperament: This versatile breed is attentive and receptive to training. With its owner, the Vallhund is devoted and affectionate. However, it can be wary of strangers. Curious, playful, and bright, the Swedish Vallhund is noted for its delightful sense of humor.

Buyers advise from Parent club: The parent club website includes links to participating breeders and available puppies and upcoming litters. Therefore, new owners are strongly encouraged to carefully investigate their chosen breeder and ask as many questions as possible.

Rescue: SVCA rescue information can be found on the club’s website by clicking on “Breed information” and then “Rescue.”