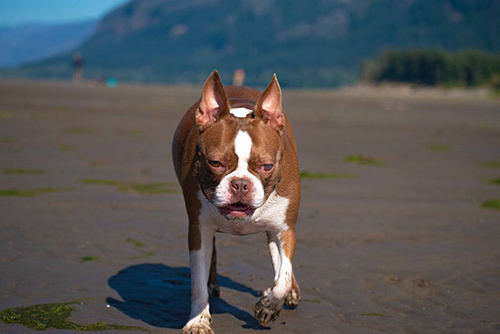 The Boston Terrier is one of America’s very own breeds; breeders developed it from a combination of Bulldogs and White English Terriers imported to Massachusetts after the Civil War. At first, the developers of this breed tried to have it documented as the American Bull Terrier.

However, they recovered as the Boston Terrier Club of America in the year 1891. Two years later, the first American breed entered the AKC studbook.

The Boston Terrier possesses the sturdiness and determination of its Bulldog and terrier ancestors. This dog is lively, spirited, and compactly built, with a clean-cut, square outline and a short, low-set tail. The short muzzle; broad jawline; and large, round, wide-set eyes create an alert, intellectual expression.

The Boston Terrier has small and erect ears, which you can leave natural or have them cropped. They’re also marked with a white muzzle band, white blaze between the eyes, white fore chest, and white on the legs below the hocks.

Temperament: This dog is both elegant and charming. In fact, it’s earned the nickname of “American Gentleman.” This breed’s personality ranges from energetic to serene. These dogs are sensitive.

Therefore, the training needs to be gentle. Boston’s excel at companionship and admired for its versatility. They’re vigilant watchdogs and wonderful therapy dogs, and they’re very good at a variety of dog sports, such as agility and flyball. Additionally, this breed is regularly good with other pets.

Grooming: We recommend A weekly brushing to maintain its coat

Color: Black, brindle, or seal in combination with the breed’s typical white markings

Group: The Boston Terrier is a member of the UK Utility Group and the AKC Non-Sporting Group

Make sure you study the official breed standard. Therefore, choose your breeder carefully and buy from a trustworthy breeder.