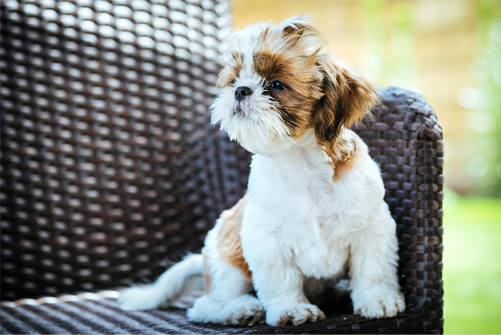 One of the most important decisions you will have to make in regards to your Shih Tzu is whether to have him or her spayed or castrated. These procedures are better known as neutering.

Neutering your dog will inactivate or remove some, or all of the tissues in the body that is associated with reproduction, such as the testicles in males, and the ovaries and the uterus in females.

Female Shih Tzu’s usually come into estrus around the age of 6 months and cycle approximately every 6 months thereafter, depending on their family genetics.

This will greatly diminish the chance of her developing breast cancer later on in life. However, if you get her spayed after the second estrous cycle, she will have just as much chance of getting breast cancer than if she had not been spayed.

Breast cancer or mammary cancer is more prevalent in older dogs, and it is fatal 50 percent of the time. Therefore, the wise thing to do is to have her neutered at a very young age. Shih Tzu puppies between the ages of six and sixteen weeks can safely go through a Shih Tzu neutering surgical procedure.

Shih Tzu neutering before sexual maturity does not affect food intake, growth rate, or weight gain. For many years, veterinarians and humane organizations have promoted the early neutering of dogs and cats. Finally in 1993 the American Veterinary Medical Association approved the procedure.

If the thought of surgical neutering does not sit right with you, pet owners now have the option of choosing chemical neutering for male Shih Tzu puppies.

In 2003, the Food and Drug Administration approved the world’s first drug to neuter puppies.

The drug is administered by an injection directly into the dog’s testicles, which causes the testicles and prostate gland to atrophy.

However, this form of castration has its disadvantages, such as:

1. The injection must be given in the right place to avoid future complications.
2. Your Shih Tzu will have to get regular follow-up care and observations to rule out medical complications after treatment.
3. If your Shih Tzu had problems with aggression before, it will still have those same problems because testosterone which is known to cause aggression in some males is not completely shut off. Therefore, Shih Tzu neutering does not solve aggressive behavior.
4. The price of the injection may cost the same as the surgical castration for some dogs.

Unfortunately, no procedure is without side effects or some risks. So, listen to your veterinarian about which technique would be best for your dog.

As a dog owner, rest assured that you are doing the right thing for your Shih Tzu. This will give your pet the best chance for a long, healthy life.

You are also doing a community service by not contributing to the problem of overpopulation.

According to statistics, for every female dog that produces a litter of puppies, there is a possibility that 67,000 descendants can proliferate in a six-year time period.

This sounds like incredible numbers doesn’t it? Keep in mind that there are thirty to forty thousand Shih Tzu’s registered in the United States by the American Kennel Club on a yearly basis.

Also keep in mind that these were all planned mating’s that were carried out by dog owners for breeding purposes. Now add to that all of the Shih Tzu’s that are not registered and all of the accidental breeding’s.

Once you’ve found the right Shih Tzu companion and experienced the joys of having such a magnificent creature, you will not be able to fathom how such a regal animal bred to live a pampered life could end up in an animal shelter, rejected, neglected, unwanted, and sick.

Unfortunately, this is true. Shih Tzus are not easy dogs to maintain, they’re very high maintenance. They require a lot of personal attention, as well as constant grooming.

Some dogs are prone to different ailments and conditions that may require medical attention. Therefore, not everyone will be able to provide, or afford the time and expense that comes with the care of a Shih Tzu.

Every hour in the United States, 2,500 dogs are born and more than 2.1 million dogs are put to sleep annually in animal shelters. Unfortunately, that is one dog every 15 seconds and Shih Tzus are among them.

Other options to Shih Tzu neutering

For those of you that do not want your Shih Tzu neutered because you may want a litter of puppies some day, you have an option.

You have the option to have a canine sperm bank collect, process, preserve, and store your Shih Tzu male’s sperm, doing this will ensure that your Shih Tzu can sire puppies after it has been castrated. Sperm can last indefinitely when it is stored in liquid nitrogen.

It is common practice among many breeders to use frozen semen in breeding programs.

A large litter of Beagles was produced from semen that has been frozen for more than twenty-two years.

Therefore, if you want to give your Shih Tzu the health advantages of castration, but you would like him to sire puppies in the future – contact a canine sperm bank.