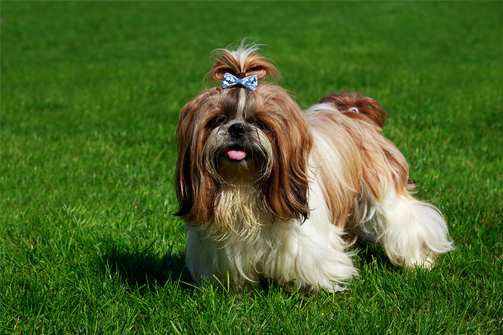 Every dog, including the Shih Tzu ancestors, can trace their lineage back to the same prehistoric meat-eating relative, a creature called Hesperocyoninae.

According to fossil records, Hesperocyoninae evolved in North America about 40 million years ago and resembled a cross between a fox and a weasel-like creature. From this creature came a variety of different dog species before its extinction 15 million years ago.

Many canines became extinct during the next several million years, such as the dire wolves (Canis dirus), which were giant wolves in North America during the Pleistocene era.

These wolves recently died out as of 10,000 years ago. Thirty-five living species of canids are still around today, including foxes, wolves, jackals, coyotes, and dogs.

These species all originated and evolved in North America, and all are distant relatives of Hesperocyoninae. Many canid species migrated from North America to Asia about 7 million years ago.

According to experts, this migration was possible because of a land bridge around during that time.

During this time, dogs did not exist, as we know them today. No human was alive to keep records of the different species. And how they evolved, but we do know that the Shih Tzu’s ancestors were present.

This was a time of unprecedented changes that took place over the ages.

When we look at the Shih Tzu today, it is hard to fathom how this elegant, gentle dog could have come from wild, savage, primitive canines that were at the bottom of the breed’s family tree.