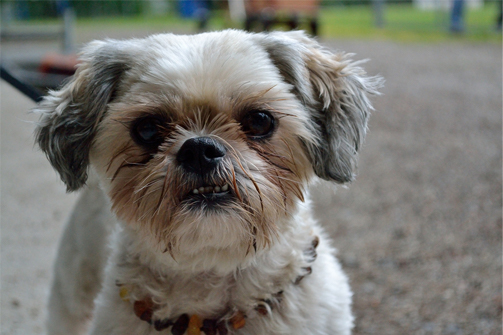 The true origin of the Shih Tzu will always remain a mystery. However, we have fossil records that may shed some light on millions of years of this breeds past.

For instance, according to fossil records, we know that the ancestors of dogs evolved in North America. However, dogs such as the Pug, Shih Tzu, and Pekingese all originated in Central Asia. These dogs are known as brachycephalic (short skulled, short-nosed, flat-faced dog breeds).

Fortunately, we also have written history and legends to help with piecing together the last 3,500 years of the Shih Tzu’s history. We also have carefully maintained breeding accounts and pedigrees for more than 150 years.

When it comes to an exciting history, the Shih Tzu wins easily. Few other dog breeds have such a compelling narrative and such a story to tell.

The Origin of The Shih Tzu Includes Asian Roots

For thousands of years, dogs have played an integral part in Asian life. We have found skeletal remains of dogs dating back more than 3,000 years to the Shang Dynasty.

Experts believe that dog breeds from Asia originated in Tibet and arrived in China about 1,400 years ago. This was possibly done via the Silk Trade Route.

The Silk Trade Route was about 4,000 miles that stretched along the Great Wall of China from Sian, the capital of the Chinese Empire, over the Pamirs Mountains, and across Afghanistan.

Pet dogs were among the many things that the Chinese traded silk. Additionally, Shih Tzus, which were also called “lion dogs or holy dogs,” were given as gifts to dignitaries of the Chinese imperial courts during the Ch’ing dynasty.

Although the lion is not indigenous to China, it was still revered by Buddha and considered a sacred and highly important beast. It was not until 2,000 years ago that the Chinese imperial courts began to import lions.

During this time, Shih Tzus became highly popular in the imperial palace at the Manchu dynasty. Along with “lion dogs,” Shih Tzus were also called “under the table dogs.”

Furthermore, a wide variety of “under the table dogs” were bred in China for 3,000 years. However, the Shih Tzu is not mentioned by name until the late fourteenth century.

“Lion dogs” consisted of a broader variety that included the Shih Tzu, Lhasa Apso, Pug, and the Japanese Chin.

The Shih Tzu was also called the “chrysanthemum-faced dog.” This name came about because the hair grew out of its flat face in all directions, like a flower.

“Sleeve dogs” was another name given to the Shih Tzu because it was small enough to be carried in the large sleeves that were fashionable back then, especially among the elite in China.

They were also called “fu dogs” (or “foo dogs”), after a lionlike creature seen in plays and art forms.

When it came to breeding Shih Tzus in China, the Eunuchs of the imperial courts had the job.

They competed amongst themselves to see who would raise the most appealing dogs. Producing the best dogs would get a eunuch high praise and gifts from the emperor.

Shih Tzus were considered good luck, and they were usual participants in regal processions and followed at the heel of emperors and empresses.

It is reported that the Shih Tzu guarded Buddhist temples and would bark at would-be intruders. The origin of the Shih Tzu is genuinely unique.

I hope you enjoyed this brief history lesson about a dog with the utmost respect and admiration of the dog lovers world-wide. The origin of the Shih Tzu is a remarkable tale about how a lovely, cuddly, majestic, intelligent, and regal dog came into existence.