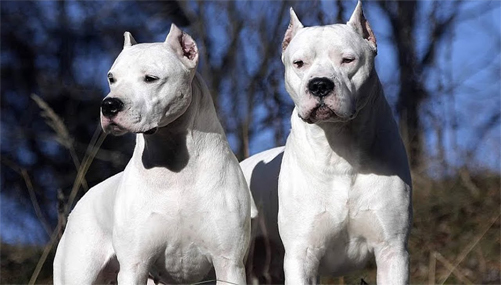 The Dogo Argentino, also known as the Argentinian Mastiff, was created in Cordoba, in central Argentina, during the 1920s by Dr. Antonio Nores Martinez and his brother, Dr. Agustin Nores Martinez.

The dogs usually accompanied the Doctors on hunting trips and quickly became known for their big-game hunters’ skills. Unfortunately, Dr. Nores Martinez was killed in 1956; however, his brother continued his work and accomplished breed recognition worldwide.

In 1964, the Dogo Argentino was recognized in Argentina, and years later became the first Argentinean breed recognized by the FCI. Additionally, the breed entered the AKC’s Foundation Stock Service in 1996 and the Miscellaneous Class in 2011.

The Dogo Argentino is a large, white, muscular dog with a slight rectangular outline and balanced proportions. The Dogo has a strong, muscular neck, a broad, deep chest, and a strong, muscular back. The legs are straight and sturdy; the feet are rounded.

Also, the tail is thick, saber shaped, and reaching to the hock. It is carried level with the back or slightly higher when the dog is moving. The dog’s head is strong and powerful; the jaws are strong, and the nose is black.

The Dogo’s eyes are dark or light brown and almond-shaped and set in black-pigmented eye rims. Its ears are positioned high and may or may not be cropped. Cropped ears are triangular and erect; natural ears are flat, medium length, and rounded at the tips. Lastly, the Dogo Argentino’s overall expression is alert and lively.

Activity level: The Dogo Argentino is a powerful dog. It is an athletic working breed that requires extensive regular exercise. Because of their white coloration, Dogos can get sunburn; therefore, they need access to shade when outside for long periods.

Coat: The Dogo’s coat is short and smooth, usually between ½ an inch long. The coat’s density varies depending on the climate in which the dog lives; those in cold areas may have an undercoat.

Color: Solid white. White with one dark patch around the eye that does not cover more than 10 percent of the head

Grooming: The Dogo Argentino’s short coat needs weekly brushing with a rubber curry brush and occasional bathing with a gentle dog shampoo made for white coats.

Temperament: The Dogo is bred to hunt big game; it is a confident, dominant, and courageous dog. With his family, he is notably affectionate and loyal. However, the breed is not recommended for inexperienced owners.

The Dogo Argentino is slow to mature; in fact, females may reach maturity by age two, while males are not fully grown until three years of age. They also have a strong guarding instinct and tend to be very protective and territorial; they can develop dominance and guarding issues.

Buyer’s advice from Parent club: Dogos are working dogs, used for hunting, police and military work, and search and rescue. They can make excellent companions for owners who are conscious of the dog’s strong working drive and need for serious physical and mental stimulation.