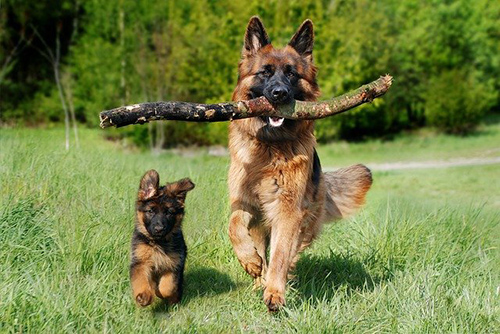 A house is never really a home unless it has a family dog. Around 67 million households across the nation have a pet dog on the property. From little yappers to huge hounds, and our love affair with mutts looks set to continue forever. Amongst those dogs, you’ll find a bewildering variety of both pedigrees and mixed dog breeds, but there are a few particular breeds that we’re all drawn to. Here are the seven most popular dog breeds in the US today:

The Labrador is not only the most popular of the large dog breeds but the most popular dog in America. A large factor in the enduring popularity of Labrador retrievers is their role as working dogs. They perform as seeing-eye dogs, amongst other vital functions. Their natural intelligence and gentle natures make them perfect for this kind of work. But it also makes them an ideal addition to any loving family. It’s going to be a long time before we see a dog breed that’s more popular than the faithful Labrador.

Like the Labrador, German Shepherds are stunningly intelligent dogs. Humans employ them in many vital tasks. These giant dog’s primary role is in private security and law enforcement. While they are not especially vicious dogs, there are few things more terrifying than a German shepherd in attack mode, making them ideal enforcers in private security. Their extraordinary intelligence helps them support police officers, where they can sniff out drugs and explosives, or scare the hell out of bad guys. They’re also wonderful family dogs, loving and loyal, and good with kids.

Golden Retrievers have traditionally worked as hunting dogs, hence the name. You shoot it; he’ll retrieve it. Their speed and instincts still make them terrific hunting dogs, but they’ve also grown a lot in popularity as family dogs over the years. Why? Because they’re insanely adorable! There is nothing on earth that’s cuter than a Golden Retriever puppy, and they grow up to be big, friendly, docile family dogs. If treated well, they’ll quickly become as much a part of the family as any of your kids.

The most popular of the medium dog breeds, the history of the Bulldog, reaches quite far back, and they were the symbol of the British Empire some time ago when that was a thing. Over the centuries, Bulldog DNA has contributed to numerous other breeds, from the famously ferocious Pit Bull Terrier to the tiny and adorable French Poodle. However, the original Bulldog is still the best, according to American dog owners.

These funny-faced little guys are notoriously hard to train, preferring to sit on their butts all day rather than listen to some dumb human shouting at them. But they are also fantastic with kids, cuddly and loving and patient. The ultimate family dog, you’ll fall in love with that funny, grumpy face as soon as you see it.

This dog is the winner in the small dog breeds category. The mighty beagle is another dog with a history of hunting that has been bred for its cuteness. And boy, are these guys cute, eager to please, and family-friendly, with adorable puppy faces that they keep for life. They have short hair that brushes well, so they’re relatively easy to have around the house without messing up your furniture. If you’re looking for a friendly, playful dog that kids will adore, then the beagle is for you.

About as far away as you can get from the German shepherd, yet almost as famous is the little Yorkshire terrier. A smart dog that almost fits in your pocket, these adorable small fluff balls have terrific personalities and are great around kids. They also don’t require a tremendous amount of exercise, given their tiny little legs, so they fit in well with the hectic urban lifestyle of people who love dogs but don’t have three spare hours to go for a walk each day. Yorkies are loyal and loving companions for life, and pretty easy to train too.

When people hear the word poodle, the first thing they think of is usually an over-groomed French poodle, possibly being led around by a snooty society lady. Poodles are big, rugged beasts that are extremely intelligent and love the outdoors. Poodles are excellent swimmers. They’re bred initially to retrieve duck hunts, so they love running in the countryside, followed by a splash around in a lake. They’re also super smart, easy to train, and seldom shed; this means that your poodle and your furniture will get along just fine.

Other Top Breeds in America to Consider