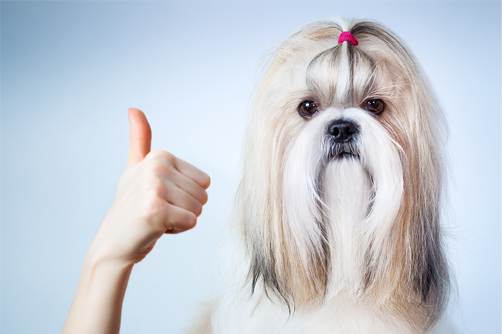 When someone in the world of dogs refers to the word “forequarters,” they’re talking about the dog’s front. This includes the shoulders and front legs when watching the dog face-to-face. All of this relates to the AKC breed standard of the Shih Tzu.

The shoulders should fit perfectly so that the dog can move easily. Straight and muscular legs are crucial and adequate space between them to compliment the broad chest. However, the elbows should reside as close to the body as possible.

Your Shih Tzu’s feet should be robust, cushioned, and facing frontward. Not inward or outward. Shih Tzus need a frontend that enables them to stand with strong assurance according to the AKC breed standard.

The term “hindquarters” refers to the back of the dog facing his or her tail. To make sure that the dog is well balanced with strong muscular legs and a sturdy bone, the angles of the dog’s hips and back legs must match the forequarter (frontend of the dog).

One of the most fascinating and impressive features of the Shih Tzu is probably the coat. The coat is luxurious and thick, straight, or just fairly wavy; it also has a dense undercoat beneath a longer overcoat.

The Shih Tzu’s hair on its head and ears should be long and flowing and, in some cases, tied up into a little topknot.

Thin coats are considered a fault, and therefore, do not represent the AKC breed standard. However, some females that have not been spayed may experience some thinning of the hair due to hormonal changes.

Shih Tzus that compete in dog shows may get a little trim here and there to neaten up the coat for the judges, but too much trimming is looked upon as a fault.

The Shih Tzu should look as natural as possible; you do not want it to resemble a Poodle. When it comes to color and markings, there is really no standard per se, because they can be any color with any markings.

No one color is considered more appealing than the other; however, the gold and the white Shih Tzu are more popular, therefore more sought after.

The Gait Of The Shih Tzu: Another Important AKC Breed Standard

When you hear the term “gait,” it refers to the movement of the dog. Your Shih Tzu should not be trying to race around or appear as if he or she has to be dragged around the dog show ring by the leash.

The way your dog walks tells the judges a lot about him or her, such as how well they’re put together as well as their attitude.

Your Shih Tzu should walk on his or her own without waddling or difficulty and should walk with grace, power, and confidence.

For example, your dog should move with his or her topline parallel to the ground, and their tail should stay swirled over their back gently.

When it comes to the temperament of a Shih Tzu, take the matter seriously. For instance, if your dog does exude confidence, friendliness, a little arrogance, and trustworthiness, calling him or her a Shih Tzu would be hard.

That is what a Shih Tzu is all about; the breed’s attitude and quintessence are what makes them some of the most highly sought after dogs in the world.

Your dog’s temperament matters just as much as his or her coat, head shape, or anything else for that matter when in the show ring.

The judges should witness a trusting, outgoing, and happy dog when they’re judging. Shih Tzus are not shy breeds; therefore, they should not be shy in the show ring or at home.

In the world of the Shih Tzu, everybody should appear kind, friendly, and compassionate. Therefore, they should act and look according to the AKC breed standard.