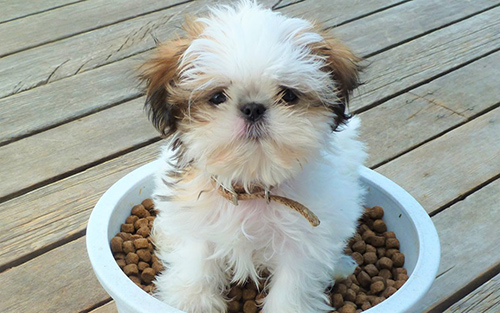 If you’re familiar with the Shih Tzu dog, I am sure you’ve heard of the Imperial Shih Tzu, or the Teacup Shih Tzu, which are tiny versions of the breed.

However, the AKC and the American Shih Tzu Club (ASTC) do not recognize this smaller scaled-down version of the breed. Also, these names are not official.

Breeders that breed these dogs for their small size claim that theirs is a legitimate breed of Shih Tzu, even if the American Kennel Club does not recognize them.

The Imperial Shih Tzu or the Teacup Shih Tzu only weighs three to six pounds. This is well below the weight of the breed standard, which is nine to 16 pounds.

These little cute dogs may look far from the controversial type, but controversy follows them. Some people think that because of their unusually small size that they’re more prone to sickness. Therefore, they should cost less than a normal-sized Shih Tzu.

However, others think just the opposite and say that these little bundles of cuteness are just as healthy as any other breed. And therefore, demand a premium price on the market. I’ve personally seen Teacup Shih Tzus go for prices of $3000 and up.

Both sides of people for and against will not pass up a chance to let you know their side of the argument.

Nonetheless, when you come down to it. There is no official written standard that exists for the Imperial Shih Tzu today. And if there is, I am not aware of it.

Before purchasing an Imperial Shih Tzu or a Teacup Shih Tzu, please understand that you take on this endeavor at your own risk.

Keep in mind that no matter how cute these little dogs are. There is a possibility that you may end up spending a lot more on health-related issues than you would have if you purchased a regular-sized Shih Tzu.

In addition to monetary caveats. Little dogs like these do not rear well in households that have little children running around. A child can easily hurt these dogs by mistake.

And let us not forget to watch our step. These little dogs could easily be stepped on by mistake also. If you have any questions about the Imperial Shih Tzu or Teacup Shih Tzu. Feel free to contact the AKC or ASTC at your earliest convenience.