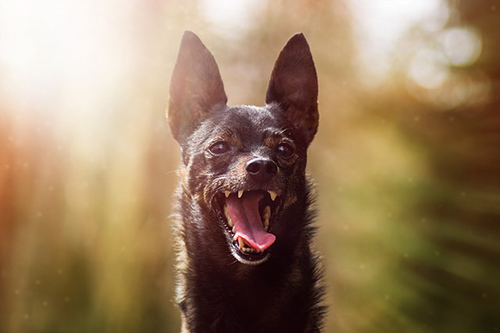 Contrary to many people’s beliefs, the Miniature Pinscher is not a miniature version of the Doberman Pinscher. Actually, the Min Pin is the older breed of the two. Information about the origin of the Miniature Pinscher is scarce. However, it is worth mentioning that a red dog the size of a cat that resembled a Min Pin is portrayed in a 17th-century painting. There were several paintings, including dogs of the Min Pin type, by the 19th century.

The Miniature Pinscher most likely results from the crossing of Dachshunds, Italian Greyhounds, and a small short-haired terrier (German Pinscher). A lot of the same traits of these breeds can be recognized in current Min Pins, such as:

However, the Min Pin is more than the sum of its parts. The dog is most likely the world’s most energetic breed. Miniature Pinschers are little German spitfires developed into a distinct breed, the “reh pinscher” in the 1800s, named for their resemblance to the small red German roe (reh) deer. The word Pinscher means terrier.

During the 1800s, emphasis was placed on breeding the littlest canines, which resulted in crippled unattractive dogs. Thankfully, this horrible trend was reversed, and by 1900, the focus turned to soundness and elegance. Pre-World War I Germany, the dogs, quickly became one of the most popular and competitive show dogs. Unfortunately, the breeds numbers declined after the war.

The breed’s future depended on those exported to other areas before the war. Its popularity increased in the United States, and the AKC recognized it in 1929. The Miniature Pinscher is dubbed the king of toys; the breed slowly amassed admirers and is presently one of America’s more sought-after breeds.

The Miniature Pinscher is a stylish, compact, spirited, smooth-coated toy dog known for its high-stepping gait. This Pinscher has a well-developed chest and a slightly arched neck. The back is slightly sloping to the rear. The docked tail is set and carried high. The head is tapered, narrow, and flat with a strong muzzle. The eyes are dark, bright, and slightly oval-shaped. The ears are set high, carried erect, and cropped or uncropped.

Activity level: High. This dog is energetic and curious. The Min Pin needs a routine structured around regular exercise within secure fencing. Without proper supervision, Miniature Pinschers can chew on or ingest objects lying around the household, squeeze through spaces in fencing, or jump through open windows. This dog needs lots of activity. Because of its size, exercise needs can be met inside the home or out. However, it requires several play sessions daily. Min Pins hate the cold.

Grooming: The dog is virtually carefree and only needs brushing at least twice weekly to remove dead hair.

Coat: The coat is short, straight, close-fitting, smooth, and satiny.

Currently, the Min Pin is a companion breed, but it is descended from independent, self-reliant, and versatile working dogs. Its nickname is well-deserved, “the king of toys.” The dogs are wise, fearless, rugged, and highly protective of their pack. Their instincts as a watchdog are admirable. The dogs are affectionate, comfort-loving, meticulous, and entertaining inside the home. Miniature Pinschers make great pets for apartment dwellers.

The Min Pin is one of the most energetic breeds; it is always in constant motion. It is busy, bold, and brash. It retains some terrier-like traits and can be independent and stubborn. It tends to be scrappy with other dogs and will chase small animals. They are reserved with strangers but affectionate with their families.

The Miniature Pinscher is a high-energy, creative breed. The dogs can be more entertaining than television but can challenge novice owners. Do proper research to confirm that this is the right breed for you because there are many things to know about the Min Pin.

Therefore, find a serious breeder that can provide ongoing training and advice. Try to attend dog shows to meet breeders with Miniature Pinscher puppies for sale where you can see the dogs in person. The puppy’s price will vary contingent on the breeder and the dog’s pedigree. Do not expect to find Min pin puppies for $200; be prepared to spend anywhere between $1500 to $6500. You can find more info about the breed on Wikipedia.

Regional clubs: Find information about the MPCA on the club’s website

Rescue: Information pertaining to rescue is also listed on the parent club’s website