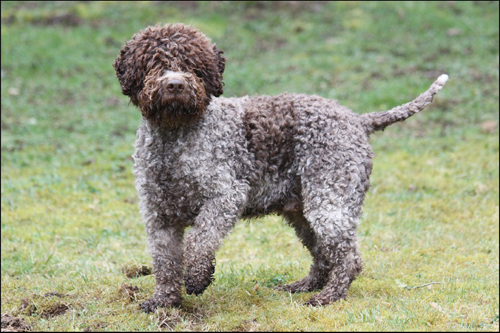 The Lagotto Romagnolo is a water dog from the Romagna region in Italy. It was mainly used as a retriever of waterfowl in the lowland valleys of the Apennines for hundreds of years.

Today, you can see the artwork of dogs that resemble the current Lagotto Romagnolo dating as far back as 1456. And there is a possibility that Lagotto-like dogs existed close to 1,000 years earlier.

The breed’s main goal consisted of game retrieval from the 1500s on. Also, the Lagotto worked closely with hunters and truffle collectors also known as the vallaroli.

However, truffle hunting became the breeds main function by the end of the 19th century.

Thanks to its determination, keen sense of smell, and an insulated, waterproof coat, the Lagotto Romagnolo proved perfect for the task of locating the highly prized underground fungi in Ravenna’s hilly woodlands.

During the 1970s the breed escaped extinction thanks to Quinton Toschi and a group of Romagna fanciers as well as other dog experts.

In fact, a Doctor by the name of Antonio Morsiani wrote the first breed standard, and shortly after, an Italian breed club was founded to protect and promote the Lagotto Romagnolo in 1988.

The breed was conditionally recognized by the FCI in 1995 and achieved full recognition in 2005. It became a member of the AKC’s Foundation Stock Service in 2001.

The Lagotto Romagnolo is a small to medium-sized dog of square proportions, covered in a dense, woolly, tightly curled coat.

It has a muscular back, strong front and rear legs, and a well-developed chest that reaches to the elbows.

The dog’s front feet are round and compact; the hind feet slightly more oval. The tapered tail is carried like a scimitar at rest and is raised when the dog is alert or working.

In profile, the skull is longer than the fairly broad muzzle. The double coat is waterproof, with curls distributed all over the body.

The large, round eyes impart an alert expression; eye color varies according to coat color. The ears are triangular with rounded tips; they are covered with wavy hair and raised slightly at attention.

Coat: The thick, woolly, waterproof, double coat is curled tightly over the body and tail. Looser curls on the head form abundant eyebrows, whiskers, and a beard.

Lagotti are natural swimmers and retrievers, which makes the breed an excellent choice of dog sports such as tracking and agility. They also love to play games with their family.

Grooming: The thick, low-shedding coat is fairly easy to maintain if kept about 1-1 ½ inches on the body and somewhat longer on the head.

It then can be tidied with regular combing, intermittent bathing, and trimming as needed. Also, clean and trim the ears on a regular basis.

Temperament: The Lagotto Romagnolo is a very loyal, and affectionate breed that possesses keen senses and a strong working drive. In addition, they’re highly adaptable and unusually smart.

In addition, the Lagotto is a great family dog who will delight their owners with their happy demeanor.

It is very important for owners to provide consistent socialization and ample amounts of daily exercise as well as training, which they can pick up very fast.

These dogs are extremely devoted to their family; however, they can be reserved with strangers.

The Lagotto Romagnolo is very trustworthy around other animals as well; however, it is important that they’re socialized with other pets as puppies.

Buyer’s advice from Parent club: The Lagotto is an excellent choice for active families, However, it is a rare breed. Buyers should contact the parent club for information on breeders here and abroad.

Ask any breeder, domestic or international, if he’s had his stock tested for hip and eye defects.