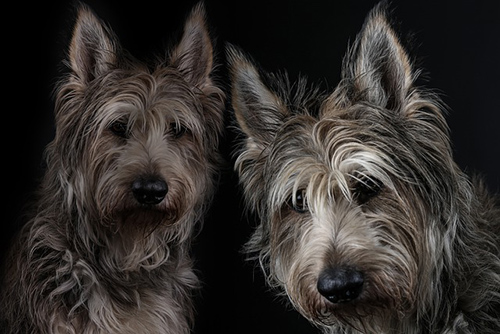 The Berger Picard or Picardy Shepherd is considered the most ancient French sheepdog and shares ancestry with the Briard, Dutch Shepherd, Belgian Shepherd Breeds, and the Beauceron. In the 9th century, the Celts introduced the breed to Northern France, and it was used to herd sheep and cattle in the region and smuggle contraband tobacco across the French, Belgian border for hundreds of years.

In 1883, Berger Picards were exhibited at France’s first dog show. Later on, the dog was regarded as its own breed, but the first standard wasn’t drafted until 1922, and recognition in France followed shortly after in 1925. Like many other breeds in Europe, the Berger Picard, and various French dog breeds, was on the precipice of extinction after World War II. Thankfully, breed enthusiasts revived it, but it remained scarce.

In 1959, the FCI recognized the dog, and the AKC entered it into the FSS program in 2007. The USA first became aware of the dogs via movies such as Are We Done Yet, Daniel and the Superdogs, and Because of Winn-Dixie.

The dog is a sturdy, medium-sized, muscular working sheepdog with rectangular proportions, a strong, level back, and a deep chest. The tail reaches the hock with a slight curve at the tip, and it is carried down at rest; in motion, it is carried level with or slightly higher than the back but never curled. Its feet are round and compact with well-arched toes.

The Berger Picard is famous for its endearing smile. Its spirited and alert expression is highlighted by its shaggy beard, mustache, and eyebrows, which are all features of the Bearded dog breeds. The head is rectangular, and the muzzle and top skull are equal in length. The dog’s nose is black and large, and the eyes are medium-sized, brown, and oval. The naturally erect, high-set ears are slightly rounded and covered with a short coat.

Activity level: The Picardy is an athletic herding dog with stamina and drive for a long day of work on the farm. This dog needs a job and daily exercise as outlets for its prodigious mental and physical energy. Enthusiastic, bright, and agile, the breed loves sports such as tracking, flyball, herding, agility, and obedience. However, herding is their main love and favorite activity.

Grooming: The dog requires monthly brushing to prevent matting. Bathing is needed occasionally, and trim only to keep the edges on the ears neat. Berger Picards are not hypoallergenic.

Coat: The Picardy has a wiry coat with a short, shaggy, dense undercoat that is weather-proof and rough to the touch. The hair is straight to slightly wavy, 2 to 3 inches long on the body, and highlighted with furnishings on the head and neck, known as griffonage.

Color: The breed comes in shades of fawn, with or without gray underlay and dark, black trim on the ears and brindle. A modest amount of white is allowed on the chest and toe tips.

This breed was bred to be a companion plus a working dog. Despite its stubborn tendencies, it approaches jobs with determination and responds well to training sessions. The dogs are loyal and good-natured companions. The breed thrives on attention from its owners but can be reserved with strangers. With continuous and proper training and socialization, they are serene, even-tempered house dogs, and their protective, confident nature makes them excellent watchdogs.

The Picard was bred to be free thinkers, an excellent trait because they are responsible for jumpy, panicky sheep. Picards get along well with children, dogs, and other pets. The dogs are comical companions, and they do not bark excessively.

Do your best to find Berger Picard puppies for sale from breeders that belong to the parent club. Make sure to research and check references carefully, and if possible, visit a breeder or two before deciding on a puppy. Also, confirm that a breeder’s stock has been tested for hip, eye, and elbow disorders. The price of puppies depends on the breeder and the dog’s pedigree.

Rescue: Rescue information can be found on the parent club’s website