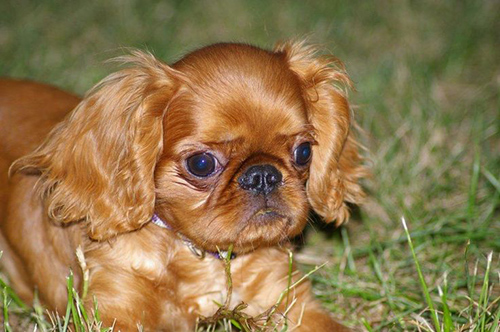 Both Cavalier King Charles Spaniels and English Toy Spaniels share identical histories. In fact, the dogs started as one breed, most likely from crosses of Oriental toy breeds and small spaniels. One theory of the breed’s origin is that Mary, Queen of Scots, imported the first toy spaniels from France to Scotland. The “comfort spaniels” were very popular with the aristocracy and utilized as lap and foot warmers and charming companions. Their popularity reached its highest during the 17th-century rule of King Charles II, who loved the breed so much that the dogs were soon being referred to as King Charles Spaniels, the name which the dogs still hold today in England.

In the beginning, these dogs were all tan and black, and various colors were developed later. The first Duke of Marlborough was credited with the development of the white and red “Blenheims,” which was named after his estate. The White and red colors might have come from Chinese Cocker Spaniels. The Duke’s spaniels were known to be good dogs for woodcock hunting. Most breed enthusiasts wanted a lap dog companion than a dog for hunting, and in the following centuries, the King Charles Spaniel was bred down in size and selected for a face that’s rounder and nose that’s flatter.

However, when the dogs got to America, the name was changed to the English Toy Spaniel and is available in two varieties:

The dogs are sometimes referred to as “Charlies” or “E.T.s,” the English Toy Spaniel continues to be highly popular with owners that want a fun-loving but aristocratic lapdog companion.

This dog is cobby, sturdy, small, squarely proportioned with a level topline and docked tail carried level with or slightly above the back. English Toy Spaniels possess a cheerful demeanor and a characteristic soft, appealing expression. The head is domed and large, the muzzle is short, and the jaw is broad, square, and upturned. The eyes are dark, round, and lustrous, and the low-set ears are covered with a long, heavy fringe.

Activity level: Low. The dogs need to be exercised on a leash or within a fenced-in yard. These spaniels are heat intolerant and should not be left outdoors during hot weather. Although English Toy Spaniels loves walks in the park or a fun game or skirmish in the yard, they’re not overly active. Therefore, their exercise needs can be met with little effort.

Grooming: Brushing two times per week is recommended, along with regular ear cleaning.

Coat: The English Toy Spaniels coat is silky-textured, profuse, and slightly wavy or straight. There is a long fringe on the ears, chest, body, and legs.

Personalities within the breed range from outgoing to aloof, but these dogs are usually quiet, affectionate, and easygoing. English Toy Spaniels make excellent apartment dogs and get along well with other pets. Training will require some patients because of their stubbornness.

This breed loves boisterous romps. It is the perfect lapdog, amiable, calm, quiet, and gentle, yet attentive and playful. The dogs are highly devoted to the family and reserved with strangers.

Reputable English Toy Spaniel breeders keep puppies until eight to ten weeks before releasing them to their new forever homes. Do not purchase a puppy for sale that is not at least eight weeks old. Also, make sure that the breeder provides you with proof of vaccinations and all shots are current and updated. For more information, please visit the parent club’s website, where you can find approved breeders in your area. Another way is to type “English Toy Spaniel for sale near me” into Google or your favorite search engine. Also, you can replace “near me” with the city or state you reside. For example, if you live in Oregon, then “Oregon” would take the place of “near me.”