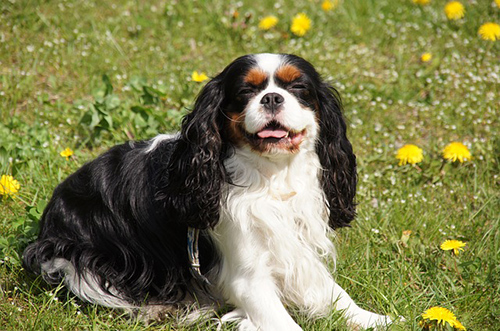 Cavalier King Charles Spaniels, as their name implies, comes from the spaniel tree. The toy dogs of Europe were most likely the result of breeding small spaniels and Oriental toy breeds like the Tibetan Spaniel and the Japanese Chin. These “comforter spaniels,” known as Tudor lapdogs, served as foot warmers and even substituted hot water bottles. Additionally, their other purpose was the crucial function of attracting fleas from the bodies of their owners. The toy spaniels remained extremely popular because of their appeal to every family member.

King Charles II, during the 1700s, was so infatuated with the toy spaniels he was accused of ignoring essential matters of state in favor of his canine companions. Because of his close association with the dogs, they became known as King Charles Spaniels. Later, after his death, the Duke of Marlborough took the lead as the prominent sponsor of the breed, the white and red “Blenheim” color, which was his favorite and carried the name of his estate.

The Cavalier King Charles Spaniel continued to be a member of the homes of the affluent for many generations, but later on, a dog with a shorter nose was preferred. By the time the 1900s came about, the few remaining dogs similar to the early members of the breed were looked upon as inferior. Thankfully, a wealthy American came to England named Roswell Eldridge and offered a lot of money for the best spaniels that possessed a “pointed nose,” which mostly resembled the old versions of the breed.

Breeders went to work and bred their old-type dogs in an attempt to collect on the money, and while doing so, many came to appreciate the old-type. Oddly, these dogs, named Cavalier King Charles Spaniels to honor the Cavalier King, ultimately surpassed their short-nosed equivalents in popularity and became one of the most sought-after breeds in England.

However, they did not catch on as fast in the United States, and most breed owners fought recognition by the AKC to control the challenges that often come with popularity. The AKC finally recognized the the Cavalier King Charles Spaniel in 1996, and today, the dog’s popularity continues to increase.

The Cavalier King Charles Spaniel contains the hallmarks of its sporting spaniel ancestors. It is well-balanced and athletic, with slightly rectangular proportions, a long, arched neck, a level back, and a very happy tail carried level with the back. The dog is distinguished by its gentle, sweet expression, produced by a combination of large, round, wide-set eyes, long spaniel ears, a full muzzle, and a black nose.

Activity level: Moderate. Some Cavaliers like to chase small animals and require exercise on a leash or within a fenced yard for safety.

Coat: The Cavalier King Charles Spaniel coat is moderate in length and silky, ranging from straight to slightly wavy, with longer feathering on the ears, chest, legs, feet, and tail.

This breed is amiable, willing to please, easy to train, and adaptable. The dog’s cheerful nature and trainability make them natural at dog sports, such as obedience and agility, and excellent therapy dogs. The Cavalier is a family companion who gets along with people and other animals.

As a result of the breed’s popularity, potential owners need to research to find reputable breeders. It is not wise to answer ads in the newspaper or internet listing puppies for sale. Visit the parent club’s website for more information and a list of approved and reputable breeders. Or, you can visit the AKC’s website and type “Cavalier King Charles Spaniel puppies for sale near me” inside the website’s search box to view a list of breeders in your area. The price of the dog hangs on the puppy’s pedigree and the breeder.

Regional clubs: Information for more than thirty regional clubs is on the parent club’s website