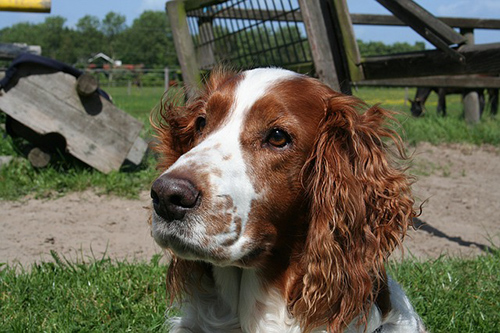 The Welsh Springer Spaniel is amongst the oldest land spaniels developed during the Renaissance for netting and falconry. The breed was widely used as a hunting dog in England in the 1700s, but its popularity declined in the following century, and a few devoted enthusiasts preserved the breed. It was shown in combined classes with the English Springer Spaniel at early dog shows and was revived in America after World War II.

The Welsh Springer Spaniel is an all-terrain, all-purpose dog with a keen nose capable of flushing and retrieving over land and water. The AKC recognized the breed in 1914. The Welsh are believed to have resulted from crosses of Clumber Spaniels and English Springers.

The Welsh Springer Spaniel is compact, with slightly rectangular proportions and hard muscle; the dog has a long, slightly arched neck and a level back. The tail is generally docked and carried nearly horizontal. The Welsh Springer has a medium-length, somewhat domed head; oval-shaped, medium-sized eyes; and a soft expression. The ears are set at eye level and hang close to the cheeks.

Activity level: High. The Welsh Springer is generally calmer than other spaniel breeds, but it is built for hard work and endurance and must have plenty of daily exercises. This breed makes for an excellent personal hunting dog. The dogs are also excellent hiking and jogging companions. However, owners should not allow puppies to partake in strenuous exercise until one year old.

Grooming: The dog needs to be brushed and combed twice a week to prevent the silky coat from tangling or matting. Good grooming habits can minimize the cottony texture that sometimes develops on spayed or neutered dogs.

Coat: The dense, protective coat is straight, flat, and soft, with feathering on the back of the legs, chest, underside, ears, and tail.

Color: Rich red and white; any pattern is acceptable in competition.

The Welsh Springer is a loyal, affectionate dog and a willing worker. The dog has a strong hunting instinct but is noted for its even, balanced nature. As a companion, the Welsh is a sensitive, sensible dog, utterly faithful and committed to its family but naturally reserved with strangers. It is a versatile hunting dog, but it must have consistent training to cultivate focus and attention from a young age.

The Welsh Springer Spaniel is a lot less exuberant than the English Springer, and it is steady and easygoing. The dog loves to hunt for birds and is highly devoted to family. It is cold with strangers, and some may be timid. These are very sensitive dogs that require plentiful socialization.