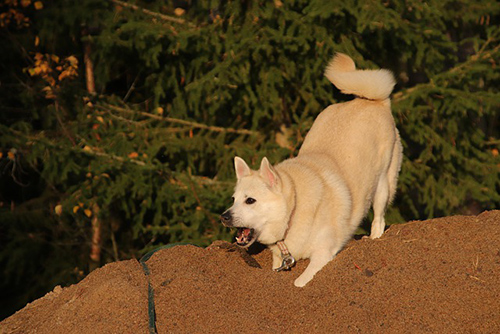 The Norwegian Buhund traveled with the Vikings and were buried alongside them to continue in the afterlife. Remains of spitz-type dogs have been found in old archeological sites in Norway and the gravesites of Vikings from 900 A.D. The Norwegian Buhund we have today is a direct descendant of these spitz-type dogs. Buhund translates to homestead, mountain hut, or farm dog. Almost every farm had at least one to help with the herding of cattle, sheep, pigs, reindeer, and a variety of other livestock.

During the summertime, shepherds and their dogs stayed up in the mountains in small huts while they tended to livestock. The Buhunds had to work on their own to herd stock, often by finding and flushing them with their bark. The terrain was rocky with steep slopes. The dogs also could walk over the sheep’s back to get from one side of the flock to the other during the times of shearing.

For hundreds of years, the dog played an essential role in farm life. Unfortunately, other breeds that were imported severely diminished the population during the early 1900s. The dogs were first shown in agricultural fairs in 1913. By the mid-1920s, Norwegian Buhund shows were held alongside state-run goat and sheep shows, which helped to renew interest in the breed.

In 1939, breed enthusiasts founded the Norsk Buhund Club. Buhunds were imported to England after World War II, and later, the United States, and in 1983 the Norwegian Buhund Club was formed. The breed finally became a member of the AKC Herding Group in 2009.

The Buhund is a spitz-type dog with square proportions and a protective double coat. It has a medium-length neck, a level back; a deep chest; and a high-set tail that is tightly curled and kept over the back. The head is flat and wedge-shaped. The dog’s muzzle is equal in length to the skull, with a black nose. The eyes are dark and oval-shaped, and the ears are medium-sized and erect with pointed tips.

Activity Level: High. This breed is energetic with a strong motivation to work. They require daily physical and mental activity. These dogs make excellent hiking and jogging companions and love interactive play such as frisbee retrieving, hiking, and dog competitions like agility and rally.

Coat: The dog’s coat combines a thick, hard, smooth outer coat and a soft, dense undercoat. The coat is a lot shorter on the head and front of the legs and longer on the chest, neck, and back of thighs.

These dogs always want to be a part of the action. They are friendly and highly affectionate, which means they demand plenty of attention and companionship from their owners. The Buhund is also gentle, usually getting along well with other animals, making them excellent family dogs. The breed is alert and self-confident, making them outstanding watchdogs. Most Buhunds possess a strong herding instinct to herd pets and children. Therefore, early, patient, and regular Norwegian Buhund training is necessary.

The Buhund is eager to please and said to be the easiest to train spitz breed, though they still like to do things independently. The dog enjoys keeping busy, and if not exercised properly, they can create games that most likely will not end well. The dogs are also exuberant barkers.

Before deciding on looking for Norwegian Buhund puppies for sale, talk to Buhund breeders and owners to make sure that this is the right dog for you. The price of puppies will depend on the breeder and the dog’s pedigree.