The Chinese Shar-Pei is a product of ancient China, dating back to the Han Dynasty over two-thousand years ago. The Shar-Pei shares its lineage with another old Chinese breed, the Chow Chow. The breed’s modern history is not that clear. However, documents show that the Hong Kong Kennel Club first recognized the dog in 1968, two years after breed enthusiasts imported them to America in 1973.

Later on, to save the dog from extinction, Hong Kong breeder Matgo Law asked American breeders for help. Thanks to an overwhelming response, the breed gained in popularity with rare-breed exhibitors. Less than twenty years later, the AKC recognized the Shar-Pei and the registration of 30,000 dogs in America.

The Chinese Shar-Pei distinctive wrinkles and hippopotamus head make the breed unique in the dog world. This breed is a compact, medium-sized dog covered by a short, harsh coat and loose skin over its head and body. The dog’s head is large, with an abundance of wrinkles framing the face. The Chinese Shar-Pei’s muzzle is very broad, and the nose is huge and full. The Shar-Pei’s eyes are small and almond-shaped, and the little, triangular ears lie flat against the head. Overall, the dog possesses a regal, dignified appearance.

The Chinese Shar-Pei is a quiet, dignified dog that is typically reserved with strangers. Training and socialization should begin early, and puppies should have consistent exposure to strangers and children. I recommend puppy kindergarten classes. The Shar-Pei responds well to positive-reinforcement training and food rewards.

Activity level: These dogs demand daily mental and physical stimulation. However, some lively games throughout the day or a nice long walk will usually suffice.

Grooming: Cleaning the dog’s lip folds every day is essential. Make sure to inspect the skin and coat regularly, and abstain from oiling the skin and wrinkles.

Find a breeder that is reputable and who researches pedigrees and screens his or her dogs for inherited diseases.

How much do Shar-Pei puppies cost?

According to estimates taken from reputable breeders, Shar-Pei puppies can cost anywhere in the range of $1000 to $3000. However, championship bloodlines can exceed $5000, which is due to their show quality and value. 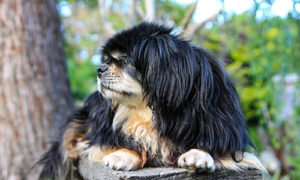