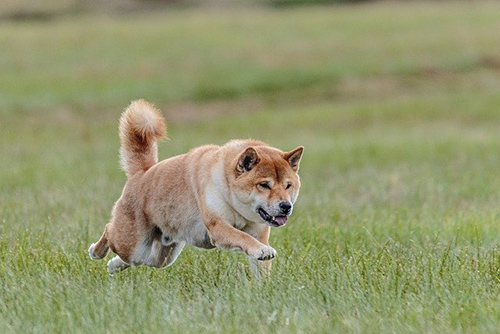 The Shiba Inu and other Japanese dogs are separated into six breeds. Amongst these breeds, the Shiba Inu is most-likely the smallest as well as most ancient. There is a theory that the name Shiba merely means small.

However, some enthusiasts believe it signifies brushwood, which references the vivid red brushwood trees that closely resemble the dog’s red coat and hunted prey.

Because of these theories, the Shiba garnered the nickname the little brushwood dog. The Shiba Inu’s origin is not clear. However, it is clearly of spitz heritage and was most likely used as hunting dogs as early as 300 b.c. in central Japan.

The Shiba Inu’s expertise is flushing out birds and small game; however, hunters occasionally used them for hunting wild boar. For instance, there are three main types, and each was named for its place of origin.

Unfortunately, the breed’s numbers dramatically decreased after World War II, and nearly lost forever due to distemper in 1952. Enthusiasts had to act fast to save the dogs from extinction.

Thankfully, the Shiba Inu survived as one breed with some disparity in bone density. The breed made its way to the United States in 1954 and was officially recognized by the AKC in 1993. Since then, the Shiba’s popularity continues to grow, and they’ve achieved quite a large following of admirers.

The Shiba Inu is a mostly compact dog that’s slightly longer than it is tall. It possesses dogs’ characteristics from a northern heritage: thick fur, curled tail, small erect ears, and a powerful body. Also, it walks around with a spirited, bold, and good-natured expression.

It walks with a quick, agile, light, and effortless, smooth stride. Shiba’s have a double coat that comprises a robust outer coat with a soft undercoat, conveying great insulation. These traits made it possible for the Shiba Inu to hunt small game over thick cover.

The Shiba Inu is headstrong, bold, and independent, making it appear to be brimming with self-confidence. It can get lively outdoors; however, they’re incredibly calm indoors just as long as they get their daily exercise.

They can be aggressive with other dogs of the same sex and will chase small animals. It is a hardy dog that’s always ready for an excellent adventure. Also, some Shibas tend to be domineering as well as headstrong.

The Shiba Inu is an excellent watchdog because it is alert, territorial, and wary of strangers. It is a very vocal breed that barks a lot.

Shibas require daily exercise, which can come in the form of an active game in the yard, a long walk, or a good run in a fenced area. Also, brushing its double coat at least twice weekly and more when shedding is best.

The Shiba Inu is a relatively healthy dog. However, they do suffer from patellar luxation. Other minor concerns are allergies, cataracts, CHD, distichiasis, PPM, and PRA. They can live anywhere from 12 – 15 years.