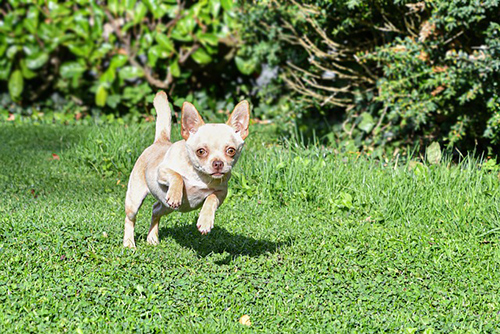 The Chihuahua is the tiniest dog breed, and its history is somewhat of a controversy. Some believe that the breed originated in China and was imported to the new world via Spanish traders, where it was crossed with small native dogs. Others think it originated in Central and South America and is a descendant of the native Techichi, a small mute dog sacrificed in Toltec religious ceremonies. According to their religion, a small red dog led the soul to the underworld, and mostly every Aztec family had such a dog that was offered and buried with any deceased member of the family.

Unfortunately for the Techichi, the Toltecs and their conquerors, the Aztecs, consumed dog meat and were sometimes on the menu. However, the Techichis were well taken care of during life by the priests or their families and lived very short lives. The most probable origin of the Chihuahua is a mix of the following beliefs: the native Techichi was most likely crossed with tiny hairless Chinese dogs. However, the date when this was supposed to have occurred is controversial.

The Chinese dogs most likely came over when a land bridge spanned the Bering Strait, or Spanish traders imported them later. When Cortes conquered the Aztecs in the 16th century, the little dogs were abandoned and left to survive on their own. Some 300 years later, three small dogs were located in Chihuahua, Mexico, in 1850. A few were imported to America, but they stirred up very little attention.

Only when the rhumba king, Xavier Cugat, was seen in public with one as a constant companion did the breed finally capture the public’s hearts. The dogs experienced a rapid rise in popularity and continue to be one of America’s top dogs.

The breed is hardy and well-balanced with slightly rectangular proportions. Although small, it is sturdy, with a well-developed chest, a level back, and a moderately long tail carried up, out, or over the back. A somewhat short, tapered muzzle balances the round apple-domed skull. The eyes are full, widely set, and luminous, the ears are large and erect. The expression is described as saucy.

Activity level: Low to moderate. A romp around the house is generally enough exercise for Chihuahuas. However, they still enjoy long daily walks and play. The dogs also love to explore yards and enjoy going on outings with their owners. Chihuahuas hate the cold weather and seek out warmth.

Coat: There are two types of Chihuahua coats. The first is the long coat with a flat or slightly curly coat, with longer hair on the ears, feet, tail, legs, and neck. The second is the smooth coat has a flat, smooth, and close-fitting coat without an undercoat. The hair on the tail is furry.

Color: All colors and marking.

According to the AKC standard, this breed is considered “terrier-like” and, ideally, fearless and self-assured. These dogs are brilliant with solid instincts, and many possess a pronounced prey drive. Chihuahuas are also devoted, protective, and courageous, making them excellent watchdogs; this can get them into trouble, though, as they will not think twice to take on a possum, raccoon, bigger dog, or burglar.

Potential owners need to be prepared to step in to prevent altercations with dangerous adversaries. The small size of the dog intensifies the need for training and socialization. Because of its size, a Chihuahua can become defensive, shy, or excessively clingy if not consistent and positively socialized.

Thanks to its intense devotion to a single family member, the Chihuahua has earned its rightful place as a favored and loved dog. The dogs are reserved with strangers but excellent with other pets and dogs within the household. Most try to offer protection but are not particularly effective. Others may be highly bold, while others may be timid. The dogs are sometimes temperamental and tend to bark.

Potential owners should study the breed standard. Try to attend dog shows to meet breeders and see their dogs. Find a reputable, approved breeder and visit to see the dogs personally, especially the father and mother of the puppy. Chihuahua puppies should be curious, confident, and energetic. Visit the parent club’s website to find puppies for sale. The price of the dogs depends on the puppy’s pedigree and the breeder.