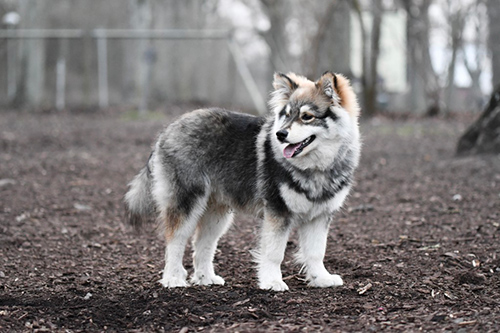 The Finnish Lapphund was not widely known to the outside world. The dogs worked as gatherers, not drovers, to keep the herds together. According to archeological digs and ancient cave paintings, a nomadic people, the Sami, who resided in Lapland (Sweden, parts of Russia, and northern Finland), have used these spitz-type dogs to herd reindeer for hundreds of years, or perhaps thousands.

However, their herding use lessened as snowmobiles took their jobs, and the Sami became less nomadic in the 1900s. During the incursions of World War II, the breed population was further diminished, and an outbreak of distemper at the end of the war almost wiped them out completely. When a group of Finland dog breeders realized the breed could be lost without their involvement, they collected dogs, adopted a breed standard, and helped them gain recognition by the Finnish Club in 1945.

The longer and shorter-haired versions of the dog were grouped as one because both often appeared in the same litters of the breed, which were then called Lapponian Shepherd Dogs. The long-coated variety was recognized as a separate breed called the Lapinkoira, or Finnish Lapphund. The short-coated version of the breed was called the Lapponian Herder, or Lapinporokoira.

The Finnish Lapphund is also called the Suomenlapinkoira in Finland and is one of their most famous breeds. In America, the breed remained largely unknown. As a result, an endeavor was made to establish them there in 1987. The number of dogs grew slowly. In 1994, the Finnish Lapphund was recognized by the UKC; and the dog became a member of the AKC Herding Group in 2011.

The Finnish Lapphund is a powerfully built dog, more substantial than it appears, with a thick double coat and almost square proportions. It has a medium-length neck, a broad, straight back, and a high-set tail covered with a profuse coat and carried over the back. The legs are heavy-boned and straight, and its feet are oval-shaped and well arched with thick, elastic pads. The dog’s skull is slightly domed, as broad as its long, with a broad, straight muzzle. The ears are small and are set wide apart to medium in size, triangular in shape, and rounded at the tips. The eyes are oval and dark.

Activity Level: Moderate. This breed requires regular exercise but are calm house dogs. It excels in agility and obedience; however, they are susceptible to heat and should not be exercised in sweltering weather.

Grooming: The dog needs to be brushed at least once per week to control shedding.

Coat: Lappies possess a profuse straight, long, harsh, water-resistant outer coat with a soft, dense undercoat. The outer coat stands off from the body. The dog’s hair is shorter on the head and front of the legs, and males have a profuse mane.

Color: All colors are permitted in competition. There is usually a primary color covering the body with a secondary color on the neck, chest, head, and underside of the legs, body, and tail.

The breed’s temperament is similar to that of a herding dog. Lappies are friendly, good-natured, and very accepting of other dogs, making them fantastic house companions. They are submissive toward people but should never be shy. These dogs are not very good protectors. They are intelligent, alert, and receptive to positive training methods, and they make excellent therapy dogs.

Finnish Lapphunds are devoted and gentle companions. The dogs are quick to learn and can be strong-willed and independent at times. Lappies were never meant to be guard dogs. The breed does excellent in obedience trials and has won numerous awards in their native land. Because of their herding instincts, they bark when excited but are usually quiet otherwise. The dogs are aware of their surroundings and alert.

Reputable Finnish Lapphund breeders care about the mental and physical well-being of every puppy produced and provide a stable environment to raise them. Potential Lapphund owners should ask the breeder to show them health-testing documentation on the parent of the litter. Visit the parent club’s website for more information on any Finnish Lapphund for sale or the cost. You can also find information and sources on the dogs 101 and Dogtime websites.

Rescue: Finnish Lapphund Club of America Rescue information can be found on the parent club’s website