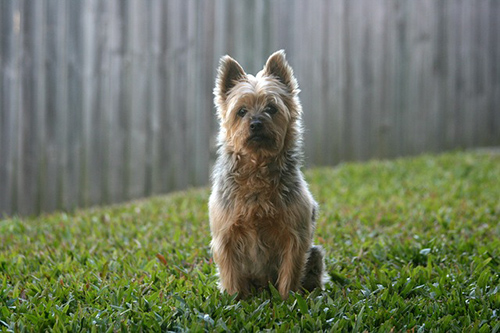 Being one of the smallest working terriers is the Australian Terrier’s main claim to fame. It is the national terrier of Australia. The breed originated in Tasmania and is a culmination of various European dogs; it also shares much of its lineage with the Silky Terrier.

This Rough-Coated Terrier from Tasmania is an all-purpose companion that is quite capable of killing snakes and rats. It is also very astute at sounding the alarm at intruders as well as controlling livestock.

The Australian Terrier is a cross of various breeds such as the Skye, Scotch, Manchester, Dandie Dinmont, and Yorkshire Terriers. As a result, a dog that is both useful as well as striking in appearance was born. The first showing of the breed came in the late 1800s as a Broken-Coated Terrier possessing blackish-blue sheen.

Over time, the Australian Terrier went by many names such as the Blue and Tan, the Toy, and later, the Blue Terrier. However, in 1900 the name changed again to the Rough-Coated Terrier, Blue, and Tan. Although this terrier is famous for its blue and tan coloring, a red or sandy color is not uncommon and was evident in earlier representatives of the breed.

It did not take long for the Australian Terrier to make its debut in British show rings as well as homes, and by 1925 it took America by storm. The AKC recognized it in 1960.

Temperament: This little Aussie is not as loud as other terriers; however, they’re tough and spirited and won’t hesitate to go after vermin whenever the opportunity presents itself. Thanks to its fun-loving and adventurous personality, it will require daily romps in the park to prevent boredom. Australian Terriers are incredibly eager to please and smart, which makes them one of the most obedient of the terriers. They also make great companions for other household pets as well as other dogs. They’re very reserved with strangers, and they love to dig, which keeps them in line with their earth dog heritage.

Upkeep: This is not a breed for lazy owners; although they make excellent apartment dogs, they’re still fairly active. They’re going to need a good hour or two outings daily. A moderate walk, boisterous game, or an off-leash run in the park or yard would suffice. Because of its wiry coat, daily combing is a requirement. Also, a twice-yearly stripping of dead hairs will be beneficial. This action will help keep her skin in prime condition all year round. Another thing to help keep your little companion in tip-top shape is to do some trimming around the feet, which will add to a tidier look. However, it is optional.

Health: The Australian Terrier has no significant health concerns; however, they have minor matters such as patellar luxation and diabetes. Also, keep an eye out for Legg-Perthes, seizures, and cruciate ligament rupture; thankfully, these conditions are not all that common. This dog is a very healthy breed and can live 12 – 14 years. Make sure to get their eyes, knee, and thyroid tested.

The Australian Terrier is a working terrier that is sturdy, small, and medium boned. It is long in proportion to its height. Due to its working pedigree, it should showcase a ground-covering gait and hard condition. It possesses a waterproof coat, which consists of a short, soft undercoat and a flat, straight, outer layer. Its fur is about 2.5 inches long and is shorter on the tail and lower legs. This terrier exhibits a keen and intelligent expression thanks to its rough cluster of hair around the neck as well as a topknot of longer hair.